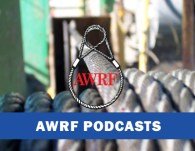 Scott St. Germain joins Jim Blasingame to explain the contribution his industry, wire rope, slings, and other products, that help lift the heavy stuff used by industry, and how his family business has been part of it for a half century.

Scott St. Germain is the CEO of I & I Sling. Scott also served as President of the Associated Wire Rope Fabricators from 2013 through 2014 and is a member of the Young Presidents Organization (YPO), Philadelphia chapter.

Scott is heavily involved in the innovation of new products and has several patents pending. I & I Sling, Inc. was founded by Scott’s father, Dennis St. Germain Sr. who is the holder of many patents and trademarks on useful rigging products, most of which are the foundation of the Slingmax® Rigging Solutions product line.

Jim Blasingame is one of the world’s leading experts on small business and entrepreneurship.